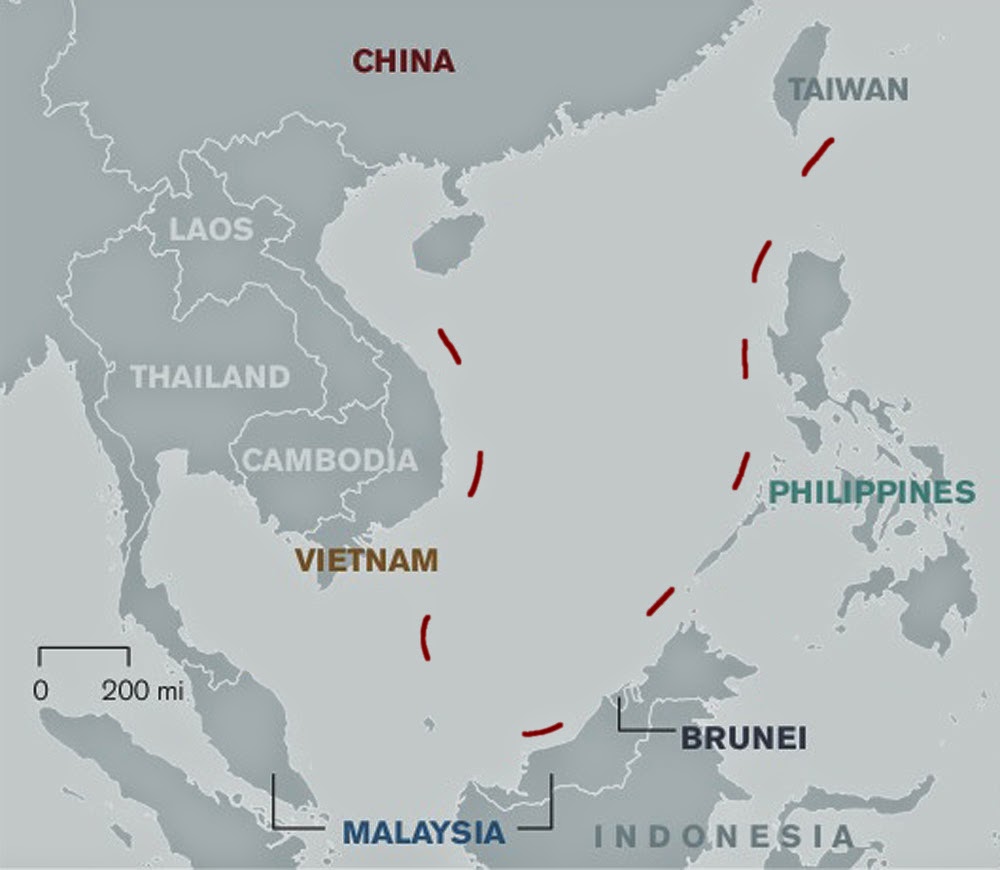 
The South China Sea is where China’s ambitions meet Asian nervousness and American power. In its waters China has abandoned any pretence of “peaceful rise” in favour of gunboat diplomacy. Armed Chinese Coastguard ships have rammed their Vietnamese rivals, blockaded Philippine outposts, disrupted Malaysian oil surveys and threatened Indonesian vessels which protect the nation’s fisheries. In response, all these countries are buying more arms and improving military ties with other governments worried by China’s growing assertiveness—primarily the United States but also Japan, South Korea, India and Australia.

At the root of all of this trouble is what Beijing calls its “indisputable historical claim” to 80 per cent of the South China Sea: all the way from Hong Kong harbour almost to the coast of Borneo, 1500km away. The problem with the claim is that there’s no credible evidence to support it. Yet this piece of historical fiction threatens peace and security in Asia and provides the stage for a struggle between China and the US with global implications. It seems scarcely credible that this potentially cataclysmic confrontation is, at its root, a dispute over almost entirely uninhabitable specks of land.

There are two main sets of “islands” in the South China Sea. (Only a very few are real islands, the vast majority are just reefs, sandbars or rocks). In its northern reaches, the Paracel Islands are disputed between China and Vietnam. In the south the much more extensive Spratly Islands are claimed by China, Vietnam, Malaysia, Brunei and the Philippines. Most of these desolate places have British names, often donated by the ships and crews that mapped them. Richard Spratly was a whaling captain who spotted his island in 1843, HMS Iroquois gave its name to Iroquois Reef during survey work in the 1920s, and so on.

When a Chinese government committee first gave Chinese names to the islands in 1935 all it did was either translate or transliterate the existing British names. In the Paracels, for example, Antelope Reef became Líng yang (the Chinese word for antelope) and in the Spratlys, North Danger Reef became B?i xi?n (Chinese for “north danger”), Spratly Island became Si-ba-la-tuo (the Chinese transliteration of the English name). The Chinese committee simply copied the British maps, errors and all. The names were then revised, twice. Scarborough Shoal, named after a British ship in 1748, was originally transliterated as Si ge ba luo in 1935, renamed Min’zhu Jiao—Democracy Reef by the nationalist Republic of China in 1947 and then given the less politically-sensitive name of Huangyan (Yellow Rock) by the communist People’s Republic of China in 1983.

Today, the Chinese authorities seem completely unaware of this. The standard official defence of China’s “indisputable” sovereignty over the South China Sea begins with the phrase, “the Chinese people were the first to discover and name the Nansha Islands.” In reality, the “Chinese people” just copied the names from the British. Even the word “Nansha” (it means “southern sand”) has moved around on Chinese maps. In 1935 the name was used to describe the area of shallow sea known in English as the “Macclesfield Bank” (yes, after another British ship). In 1947 the name Nansha was moved southwards on Chinese maps to refer to the Spratly Islands.

A full examination of each justification put forward by the Chinese side would run to many pages but suffice to say that there is no archaeological evidence yet found that any Chinese ship travelled across the sea before the 10th century. Up until that point all the trading and exploration was carried out by Malay, Indian and Arab vessels. They may, from time to time, have carried Chinese passengers. The much-discussed voyages of the Chinese “eunuch admirals” including Zheng He, lasted a total of about 30 years, until the 1430s. After that, although traders and fisherfolk plied the seas, the Chinese state never visited deep water again until the nationalist government was given ships by the US and UK at the end of the Second World War.

The first time that any Chinese government official set foot on any of the Spratly Islands was 12th December 1946, by which time both the British and French empires had already staked claims in the Sea. A provincial Chinese delegation had reached the Paracels a few decades earlier, on 6th June 1909, making what appears to have been a one-day expedition, guided by German captains borrowed from the trading firm Carlowitz. On such humble claims rests international confrontations.

This is the picture of history that emerges from the best independent scholarship. But tell it to almost any Chinese person and they will react with incredulity. From schoolroom to diplomatic chancery an official memory of Chinese sovereignty over the Sea has become an established fact. How did a national sense of entitlement to the South China Sea grow so strong from such shaky foundations?

The story probably begins with the first Opium War in 1840 and what the Chinese now call the “century of national humiliation” that followed. China clearly suffered grievously at the hands of Western and Japanese imperialists: thousands were killed, cities were colonised and the government fell in hock to international banks.

The geographer William Callahan and others have outlined how, as part of the struggle against foreign domination, nationalists and communists deliberately cultivated a sense of territorial violation to mobilise the population. From the 1900s onwards, Chinese geographers such as Bai Meichu, one of the founders of the China Geography Society, began to draw maps to show the public how much territory had been torn from away from China by the imperialists. 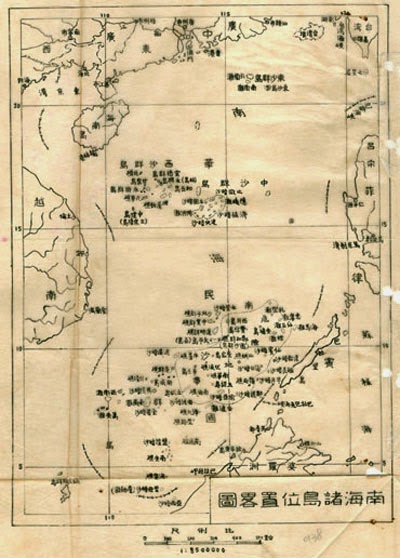 These “maps of national humiliation” assumed that China’s rightful territory included every former vassal that had once offered tribute to a Chinese emperor. They included the Korean peninsula, large areas of Russia, Central Asia, the Himalayas and many parts of Southeast Asia. Lines were drawn on these maps to contrast the vast domains of former empires with the country’s shrunken state. Fatefully, after the official Chinese committee had renamed the islands in the South China Sea in 1935, one of these lines was drawn around the Sea. This is what is now called the “U-shaped” or “9-dash” line encompassing 80 per cent of the Sea and all the islands within it. That cartographical accident, based on misreadings of Southeast Asian history, is the basis for China’s current claim of sovereignty.

China clearly suffered abuse at the hands of domineering foreigners but the modern state that emerged from the rubble of the Qing Dynasty and the subsequent civil wars has found solace in false memories that bear little relation to what actually happened. As any visitor to the new “Road to Revival” exhibition at the National Museum of China in Tiananmen Square will discover, this false memory syndrome is a critical ingredient in the legitimising myth of the Communist Party: that it saved the nation from humiliation.

The nationalist academics and government committees of the first half of the 20th century have bequeathed the Communist Party an “official history” that is demonstrably false. It is this, and not the threat of nationalist mobs on the streets that makes the South China Sea disputes so intractable and dangerous. But to concede its falsity would remove a cornerstone of the Party’s position at the apex of Chinese society.

There are, unfortunately, no easy alternatives to continuing strife in the South China Sea. No side wishes to provoke an outright conflict but none is willing to reduce tension by moderating its territorial claims. Some Chinese officials privately recognise the legal absurdity of maintaining a the “U-shaped line” claim. But those same officials say they cannot formally adjust the claim for political reasons—the domestic criticism would be too great. How then could a Chinese population be persuaded to take a different view of the history of the South China Sea?

Perhaps one answer lies in Taiwan. The chances of a freer debate on Chinese history are much greater in Taiwan than in the mainland. There are already a number of “dissident” academics rethinking aspects of 20th century history. Taiwan is also where the archives of the Republic of China, the government that first drew up the “U-shaped line,” are stored. An open and thorough examination of the haphazard process through which the line came to be drawn might convince opinion-formers to re-examine some of the nationalist myths they have long declared to be gospel truth.

Perhaps the strongest reason for starting in Taiwan is that the authorities in Beijing fear that any concession they might make would be loudly criticised in Taipei. If the authorities there were to de-escalate the historiographical conflict in the South China Sea, it would be much easier for the Beijing government to do the same. The key to a peaceful future in Asia lies in an honest and critical examination of the past.

The South China Sea and the struggle for power in Asia by Bill Hayton will be published by Yale University Press in September.

http://www.prospectmagazine.co.uk/world/chinas-false-memory-syndrome
Posted by Minh Đức at 6:41 AM