VietNamNet Bridge – Another ancient document showing that China’s southeastern frontier ends at the Hainan Island has been found: a map that was drawn at the order of Emperor Kangxi of the Qing Dynasty in 1717.

An electronic version taken of the original map kept in the British Library. The photo is provided by the Library.


China’s territory included land and waters where Chinese emperors had sovereignty over and controlled. Therefore, the easiest way to see China’s official territory is to consider China’s historical documents or Chinese maps published by Chinese emperors.

The map that was drawn and published at the order of Emperor Kangxi in 1717 is such evidence. This is an official document of China, with international values that China can use to determine their sovereign lands.

This article aims to identify an event that Emperor Kangxi sent Western Jesuits everywhere for topographic surveying and mapping of the Qing Dynasty’s territory.

This work took almost 10 years and its result was the map of China entitled “Huangyu quan lan tu” in 1717.

According to this map, the southeastern border of China ends at the Hainan Island. This is a new contribution because the maps by the Qing Dynasty that have been used so far have unknown origin and are unofficial.

On March 28, 2014, the German Chancellor Angela Merkel gave the copy of the map drawn by Jean-Baptiste Bourguignon d'Anville and printed in Germany in 1735 to Chinese President Xi Jinping. 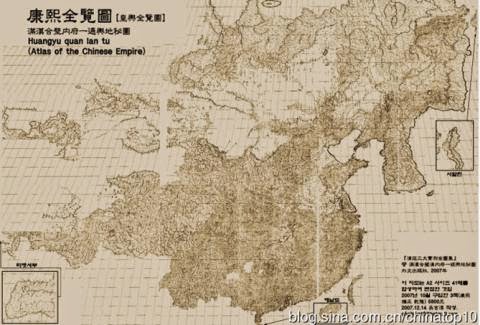 Before 1909, the Chinese government had not regarded the islands and the East Sea out of the southern island of Hainan as their waters and islands. At the same time, the Nguyen Lords and then Emperor Gia Long of Vietnam sent soldiers to the Paracel Islands.

This is recorded in the book “Phu Bien Tap Luc” by historian Le Quy Don (written from 1776-1784), in the official history in 1848, and foreigners also recorded the statement of sovereignty by Emperor Gia Long over the Paracel and Spratly Islands in an article published in 1837, and there were no objections from China.

Notably, many Chinese scholars have not used official historical documents or the official maps of the Chinese dynasties, especially the last Qing Dynasty to determine where the official border of China is. They have only used documents by travelers and explorers who only passed through and noted down what they heard. The maps they have used were all drawn by individuals, and not official maps.

To identify whether China previously considered Paracel and Spratly Islands as their territories, we should research the official historical documents of the Ming Dynasty (1368-1644), the Qing Dynasty (1644-1912) and the official maps of these two dynasties, because according to the International Court of Justice in 1933, the intention, will and effective implementation of the sovereignty must be at least identified in official historical documents and official documents.

The history of the Ming Dynasty and Qing Dynasty showed that China’s border ends at the Hainan Island. They did not care about the Southeast Asia Sea beyond Hainan, so China cannot say that the East Sea is their long historical area.

The documents noted by individuals are not considered evidence for sovereignty of their country in the areas where they passed.

In the Qing Dynasty, the Hainan Island included Qiong Zhu and Zhu Ya, later merged into the Qiong province. Thus the Paracel and Spratly Islands are not located within China’s border.

At that time, Vietnam’s Nguyen Lords (1558 - 1777) and the Nguyen Dynasty (1802-1862) exercised their continuous sovereignty over these islands without being opposed by China.

Under international law, a claimant for sovereignty based on the continuous exercise of sovereignty consists of two elements, and must prove that each element shows the intention and will to act as the owner, and some activities to prove that ownership.

In the case of Vietnam, the activities of Nguyen Lords in Paracel Islands were recorded by Vietnamese famous historian Le Quy Don in the official historical book entitled “Phu Bien Tap Luc”, and King Gia Long’s claims of sovereignty over the Paracels were recorded by Frenchman Taberd and published in 1837. The activities exercising Vietnam’s sovereignty over Paracel Islands conducted by the emperors after the death of Emperor Gia Long were also recorded in the official history. 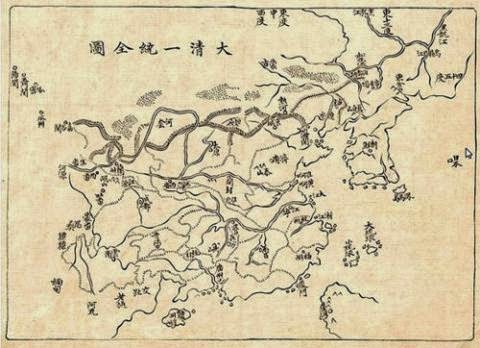 There are many ancient Chinese maps published in China until the end of the Qing Dynasty that did not consider Paracel and Spratly Islands as Chinese territory.

The map below is the official map of the Qing Dynasty that was drawn by Western priests at the order of Emperor Kangxi (1644-1912) over 10 years.

Therefore, the purpose of this article is to examine this map. We can say this is the first time this map is reviewed for the purpose of determining the border of China.

According to the article “Traditional Chinese Cartography and the Myth of Westernization” by Cordell DK Yee, before the Jesuit Matteo Ricci (1552-1610) and Michelle Ruggieri (1543-1607) went to Guangdong in 1583 for missionaries, the Chinese knew how to use squares to express the spacing on the map, but they did not know that the earth is not flat, but spherical, and they did not know how to use the Ptolemaic system for expression.

Priest Matteo Ricci introduced the precise technical drawing of the West into China and considered it as the way to carry missionary work. Ricci redrew the map of China based on Chinese information, using Western drawing principles.

These maps just copied the available information, not based on topographic surveying. Some Chinese were interested in these maps and reprinted them. However, they changed the maps by their artistic vision since, at that time, Chinese intellectuals considered maps as art objects like paintings and calligraphic works, not precise sciences.

Even Ricci put China in the middle of the world map, presumably to make the Chinese happy. Emperor Kangxi was very interested in Western science, like mathematics and astronomy. He built an observatory in 1644 and decided to use a western calendar from 19/10/1644 because it was more accurate.

In 1698 the Jesuits asked for Emperor Kangxi’s approval to measure topography of China to draw the Chinese map, saying that the old maps were inaccurate and even misleading.

According to Cordell D.K. Yee, in 1698, after hearing the proposal by Jesuit Dominique Parenin (1665-1759), Emperor Kangxi asked Joachim Bouvet (1656-1730) to return to France to recruit those who had good knowledge of astronomy, mathematics, geography and topography measurements and take them to China to help redraw China’s map.

After considering the above maps, Emperor Kangxi found that the Western techniques in mapping were much better than the traditional way of China so he assigned the Western Jesuits to draw the map of entire China. This map was completed in 1717, called the “Huangyu quan lan tu”.

This map is mentioned in the historical book of the Qing Dynasty – Qing shi gao - as follows: "In the Kangxi 58th year, the entire map is completed. This is a comprehensive map consisting of 32 sheets. There are separate maps of provinces, one sheet for one province.”

The "Qing shi gao” is though not entirely the official history because it was completed in 1927 after the Qing Dynasty had fallen, but it was compiled at the order by the Qing King so it can be considered official.

The woodblock print by proportion 1:1.200.000 in 1721 also has 32 sheets, one sheet for each province, just like the map in 1719. This woodblock was sent by the Western Jesuits to Europe and it was used as the basis for the book “Description, Geographique, Historique, Chronologique, Politique, et Physique de l'empire de la Chine” (1735) by Du Halde and the book “Nouvel atlas de la Chine” by JB Bourguignon.

In 1726, the Kang Hsi Imperial Encyclopedia was completed, consisting of 216 administrative area maps, without Mongolia and Tibetan. These maps were similar as the maps drawn by the Jesuits, but not having the longitude and latitude lines.

The Kang Hsi Imperial Encyclopedia was printed by the Qing Dynasty in 1728, with 5,020 episodes, including illustrations and writings from the earliest times to the modern period, written under the Kangxi and Yongzheng dynasties. This encyclopedia includes 800,000 pages and 100 million words and there are only 60 printed copies.

The Chinese map was reprinted in Traditional Chinese Cartography and the Myth of Westernization by Cordell DK Yee as mentioned above (see photo). The photo also shows that the Chinese territory to the southeast ends at the Hainan Island.

The “Huangyu quan lan tu” map is the foundation for other maps published later in China, which do not have clear origin.

Here are some maps that are kept in Western libraries, which can be referred to online. All show that China or Guangdong province does not have the Paracel or Spratly Islands:

1. Huang yu quan lan fen sheng tu map is archived in the US Library of Congress. This map can be found online. This map was donated to the US Library of Congress in 1884, and the year of publication is 1693. The map was drawn by Western principles so it could not be made before the Emperor Kangxi asked Western priests to draw the new China’s map in 1705. The year of publication 1693 should be a mistake. The map must be drawn after 1717, after the Huangyu quan lan tu map was printed and it seems to be a copy.

2. Da qing yi tong quan tu map is currently stored in the National Library of Australia. This map, based on analysis by Cordell DK Yee (mentioned above) as well as maps in the Kang Hsi Imperial Encyclopedia, are just the copies of the official map Huangyu quan lan tu, without the two provinces of Xinjiang and Tibet, but it was drawn in the combined style of Western and Chinese. This map consists of 12 individual parts; part 1 is the whole of China; part 12 is Guangdong, which ends at the Hainan Island.

3. Huangyu Quantu is the official map published in late Qing Dynasty. In 1890 the Qing government wanted to standardize the mapping of provinces and administrative regions so it set up “huidianquan” and told these huidianquan to draw local maps, using the Western method, but many localities redrew the maps based on the maps of the Jesuits because they did not understand the drawing principles.

As a result, the Huangyu Quantu, 1899, in Qinding Da Qing huidian, includes 24 sets (Beijing Huidianguan, 1899). It is the official map because it was printed by Huidianguan.

It can be concluded that there is a map that was drawn by Western Jesuits at the order of Emperor Kangxi, i.e., China used to have a formal map.

According to this map, China’s border ends at the island of Hainan and nothing has changed then. This is also consistent with the history of China during the Ming Dynasty (History of Ming) and the Qing Dynasty (Draft History of Qing).

Ho Bach Thao, a Vietnamese researcher, had researched the History of Ming and the Draft History of Qing and found that these books did not mention Paracel and Spratly Islands and also showed that China’s border ends at Hainan Island.

The China map with the nine-dash line was made in 1947 by Bai Meichu, an official of the Chinese People's Republic (now Taiwan).

This homemade map that does not reflect the true history of China’s border, which has been used by the Chinese state, contrary to international law, to claim its sovereignty over the islands and sea areas within the U-shaped line, covering up to 85% of the East Sea.

They have used unorthodox and vague materials about the waters where Chinese people passed to prove that these waters belong to China from the Han Dynasty (206 BC - 220 AD).

This claim is completely contrary to the history of the Ming and Qing Dynasties and the map drawn at the order of the Qing Emperor Kangxi, which was drawn over 10 years by Western priests.

Until 1909, China - and only the government of Guangdong province - sent people to learn about the Paracel and it was not until 1952 that Zhou Enlai raised claims over the Spratly Islands for the first time.

Given that, Paracel and Spratly belonging to China since ancient times is fabricated and untrue.

http://english.vietnamnet.vn/fms/special-reports/104163/china-s-southeastern-border-ends-at-hainan-island--chinese-emperor-s-map.html
Posted by Minh Đức at 8:56 AM