They include members of the Communist Party, which has a monopoly on political power under the constitution.


The move comes as officials have recently detained dozens of bloggers for dissent.

In Vietnam, questioning the ruling party's monopoly on power is considered a serious crime.

Correspondents estimate that close to 38 activists, including bloggers, have been arrested for anti-state activities this year.

But the government has increasingly come under pressure from a number of bloggers over human rights issues and governance issues.

The activists include two prominent members of the Communist organisation Fatherland Front. They are planning to call their party the Democratic Socialist Party. 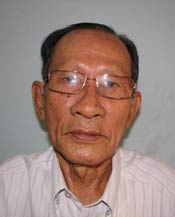 Ho Ngoc Nhuan, who sent the news about Le Hieu Dang forming a new party to web sites. Both Le Hieu Dang and Ho Ngoc Nhuan are members of Fatherland Front. Both were activists on communist side in South Vietnam during the Vietnam War.

Their declaration follows months of unusually lively debate over the political system, after the ruling party asked for public feedback on its proposals for mild reform of the Soviet-style constitution, says the BBC's Jonathan Head in neighbouring Bangkok.

Meanwhile, an appeals court in Long An province has reduced the sentences of two activists. 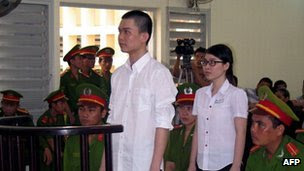 
Nguyen Phuong Uyen, 21, was sentenced in May to a six-year sentence. But on Friday the court ordered that instead she should receive a suspended sentence of three years, meaning that she was immediately freed. 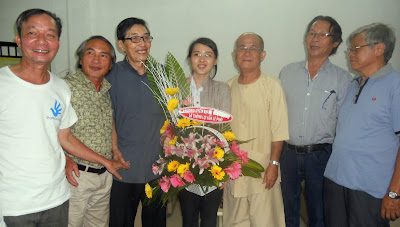 Nguyen Phuong Uyen (center) at home with friends and family

The sentence of the other activist, Dinh Nguyen Kha was reduced to four instead of eight years.

Both were arrested last year, with rights groups criticising their trials.